How I Founded Original Mineral 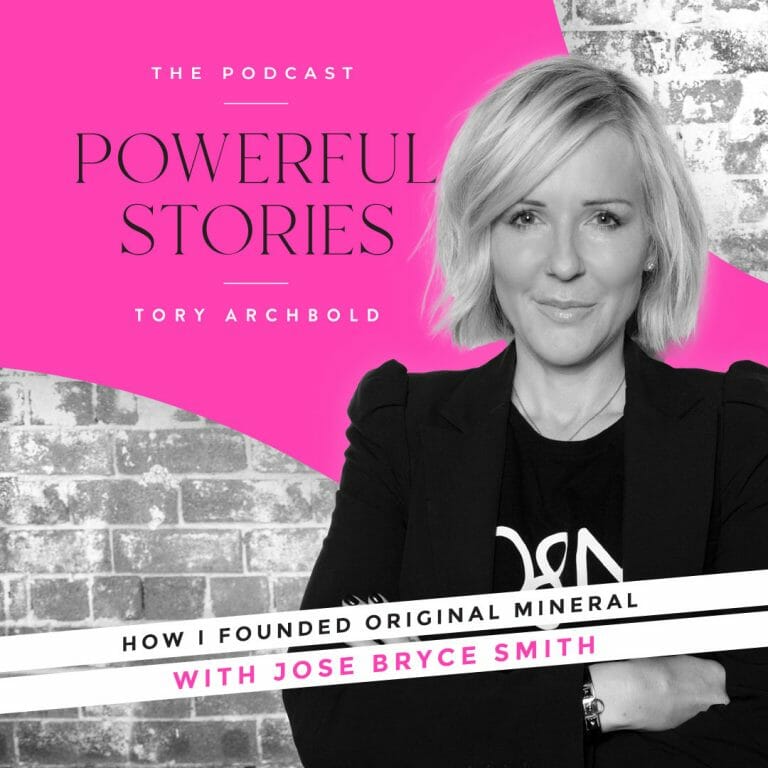 I have known Jose for 22 years – we first crossed paths when her hair salon in Paddington was one of my first PR clients. At that time, she told me she had a dream to own a global business – and now she has converted that dream into a brilliant reality.

Jose’s game-changing moves changed the hair industry when she pioneered hair products that had never been made before. Two decades ago, she created the first ammonia-free hair colour. Today, Original Mineral is available in 15 countries around the world, boasts year-on-year growth of around 30% and turns over $20 million dollars a year.

In this enlightening conversation, Jose and I discuss how she built her business through a fierce combination of passion and hustle, and how combining her career with motherhood has been an “immense struggle” at times.

She talks about the process of deciding whether to take on investors, the questions to ask when vetting private equity firms, and why she believes it’s wise to go with investors who will let you retain control as the heart and soul of your business.

Jose also opens up about how her kids keep her grounded by reminding her that she’s “just a shampoo saleswoman”. Jose is a beautiful example of a business woman who is heart-led, not ego-led, and I know you are going to love this conversation.

[1:31] Jose talks about her humble beginnings as a receptionist in a hair salon, and how her idea for Original Mineral came about via the desire to solve a problem – namely, the smell and fumes of hair colour in salons at that time. We also discuss how persistence pays off, and how a little write-up in Vogue changed everything.

[3:23] Building her global business was achieved through pure passion and hustle – from the early days where Jose lived above the hair salon, with a fold-out bed and no kitchen and bathroom (so she used to shower at the pub down the road!) for two years.

[3:59] Jose built her empire very much from the ground up, pioneering the way with something that had never been done before. She took ammonia and then PPD out of hair colour. There were lots of learnings along the way, including the importance of championing the customer an viewing them as your business’ hero.

[6:54] Jose is a fantastic relationship-builder and isn’t afraid to fly the extra mile (literally) to build valuable connections. We discuss the importance of focusing on human connection versus virtual connection.

[10:30] The game-changing connection that changed the trajectory of Original Mineral, and how it was strengthened by her refusal to give up (including flying to Bali to meet a distributor on his holiday, as it was the only time he would agree to meet!).

[11:50] Navigating the barriers that come with being a woman in business, and the lengths Jose has gone to in the name of overcoming these – including recruiting a man she met on a dating app to pose as a board member in a meeting to give her business more cred, which resulted in her landing a $4 million contract for the business.

[13:24] The make-up of Jose’s current team includes 30 people based in Sydney’s Redfern, plus 10 staff in Original Mineral’s New York salon. She also plans to open an academy in LA, and we discuss her plans to establish the brand in the US to capture the market there.

[14:20] Jose talks being approached by private equity firms, her decision to take on a US-based investor in order to scale the brand and the difference it has made, particularly in the back-end of the business. She also reveals what the process of doing your due diligence looks like, and important question she asked potential investors during the interview process.

[18:37] She opens up about the “immense struggle” of running a global business as a single mother to two young children, and the importance of outsourcing to keep things ticking along.

[21:37] Jose believes that ego is the enemy of success. She doesn’t believe any task is below her, and doesn’t care what anyone thinks of her – while always being respectful.

[23:00] How Jose feeds her soul by being her own best friend, practising gratitude, giving to others and connecting with the ocean. She also shares a book recommendation and the benefits of viewing all of your experiences as learnings.

[25:51] The three powerful steps Jose recommends for others wanting to build a global business.

Where to find Jose Bryce Smith

Are you ready to take a powerful step forward in business and in life? You can join Tory’s dynamic community of top women entrepreneurs by signing up to the Powerful Steps newsletter to stay in the know about upcoming events and offers.

You can also connect with Tory Archbold and her business mentoring offerings, including the popular Business Attraction Program, here: