Quitting Alcohol and Returning to Yourself 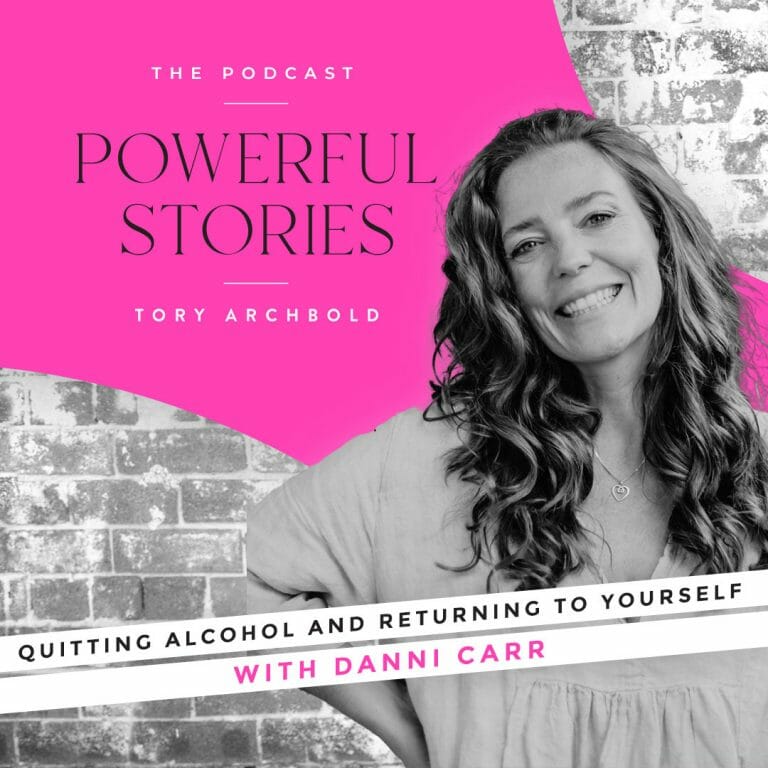 In this episode of the Powerful Stories podcast, I share a beautiful conversation with Danni Carr from How I Quit Alcohol. Danni is a woman I greatly admire and have had the privilege to connect with through BODfest, the exciting min-fest of self-love which covers health topics including mental health, with the aim of nurturing and celebrating confidence in all of us.

I’m particularly excited about this conversation because I believe the issue we’re discussing affects everyone, no matter their age, race, nationality, sexuality. At some point, we all have to deal with alcohol and our relationship with it.

Danni and I talk about why she decided to quit alcohol, and how it changed her life. Becoming sober helped her to become present and happy in her own skin, as she focused on prioritising herself and her happiness.

Today, this incredible woman has ditched the fake glow that can come from alcohol, and instead brightly shines her own light by coming from a place of beautiful authenticity. Danni has learnt to sit in her own uncomfortable feelings and feel them, rather than trying to escape them through alcohol.

I particularly love how Danni observes that alcohol takes you so far away from yourself, while sobriety brings you back. She shares that her evolution is still a work in progress, and that she’s perfectly imperfect, but much more in her power these days. This is a woman who feels complete and happy in who she is, and she truly radiates this. Enjoy!

[1:47] Danni started binge-drinking from the age of 13, and from early on linked fitting in and acceptance with drinking alcohol. In her 20s, she and her husband worked in the music industry so alcohol was everyone – both on weekends with friends but also at work. As she got older and began blacking out, and not remembering putting her kids to bed – the post-drinking anxiety and shame got too much. When she felt she couldn’t look at herself in the mirror anymore, she knew it was time to make a big change.

[4:48] Danni and her husband Ash made a pact with friends to take 12 months off alcohol, and she felt this gave her the permission not to drink. After this, Danni realised she felt too good to start drinking again.

[7:08] Breaking the cycle happened when she told everyone around her. She talks about learning to get through parties without a drink and how much better she felt the next morning.

[9:17] If Danni met her younger self today, she would tell her to ‘just relax, and you’ll be ok, you’ll find your tribe, and you don’t need to fit any mould just yet’. She says that when it’s a problem, alcohol can be an attempt to escape discomfort we’re feeling, whereas not drinking lets us meet what we’re actually feeling inside, learning to be able to feel uncomfortable at times and know that’s ok.

[11:21] Danni talks about how she performed on stage sober recently for the first time, and how she and her husband made their first year off drinking about self-improvement, working at their craft and mindset.

[13:44] Danni says the secret to how she kept up her sober life often involved ‘playing it forward’ – asking herself how will she feel tomorrow? She also practices visualisations before attending an event where saying no might be tricky and asking herself, ‘What’s the most loving thing I can do for myself right now?’.

[15:27] Danni says that after quitting alcohol for good, she sees the whole world differently, from appreciating the sunrise every morning when she does her meditation, to her connections with people, which have improved and become richer.

[17:51] She shares three Powerful Steps that listeners can take to quit alcohol, including adopting a gratitude mindset, exercising every day and visualising where you want to be.

[18:22] Danni;s legacy is to help people to see a different way of being, especially those who are in a place where they feel there’s no way out. She says that change is always possible.

[22:59] Danni’s next powerful step includes the new challenge of writing a book with her husband, and the continuing evolution of finding out who she is.

Where to find Danni Carr