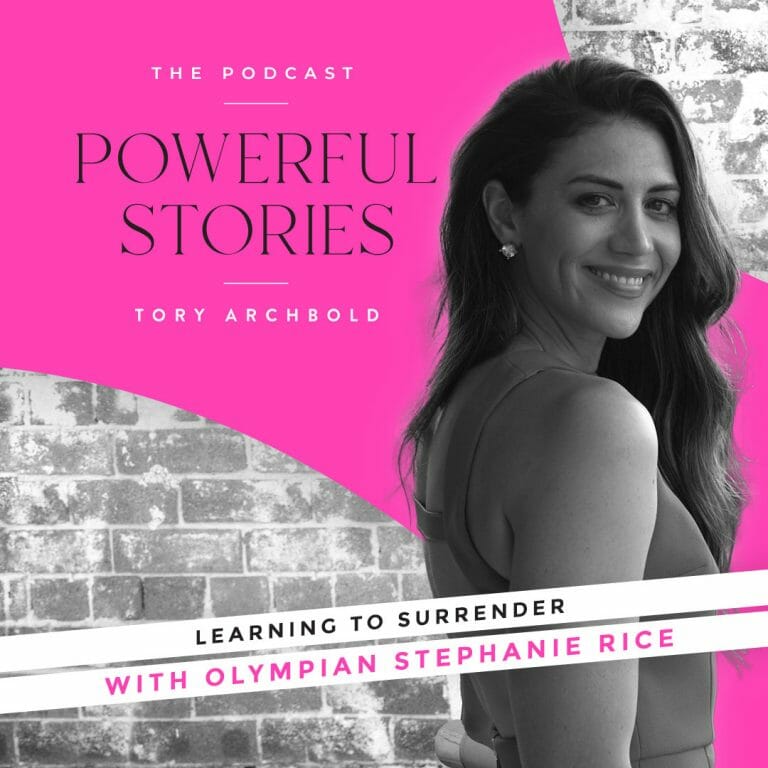 In this episode of the Powerful Stories podcast, I chat to the fabulous and fearless Stephanie Rice. You probably know her as the former Olympic swimmer, but she has undergone something of an evolution in recent years, and there’s much more to this powerful woman. Stephanie is a conduit for sharing her story and showing others that challenges can become possibilities, and she is brilliant at leveraging her huge social media following and the community she has built there to help others.

However, as Stephanie will tell you, she has a love/hate relationship with social media. One of the major values she leads her life by is authenticity, and in this we are very aligned. I personally believe that human connection is the best connection, and Stephanie and I discuss how she prioritises business partnerships that align with her truth and also value human connection.

We discuss self-love, and the process of learning to surrender your desires to the universe, and being open to receiving what comes your way. Stephanie shares  how many people assume she is a naturally happy person, but in fact, she says that she has worked hard to become the happy, positive person she is today. Steph also opens up about her daily practices, including cultivating gratitude and appreciation every single day, and the mantra she recites every morning upon waking.

Stephanie Rice truly is a woman who is grounded in her authenticity, and who is doing a stellar job of building longevity in business by virtue of knowing and being herself. I took many learnings away from this conversation, and I hope that you do too.

[1:16] Stephanie discusses the support she received from Jackie Frank, former editor of Marie Claire Australia, when she was at the height of her success as an Olympic swimmer.

[2:30] She opens up about the dark period she experienced following her swimming career, and where she’s at with this now, in addition to what encouraged her to share her struggles publicly when the time was right.

[5:39] Stephanie talks about feeling like a ‘nobody’ after she retired from swimming. We discuss the difficulty of transitions, particularly when moving on from a career that we have linked our self-worth and identity to.

[07:06] Finding self-love and self-acceptance is still a process for Stephanie. She takes time to read, meditate and sit with her emotions when they come up, and this helps her to meet herself.

[9:45] Stephanie tries to build rituals into her daily life, such as meditating to connect with her intuition and receive guidance.

[11:40] She talks about the difficulty of learning to surrender, especially being a driven, successful woman and the dichotomy of going after things versus surrendering and being open to receiving.

[13:36] Stephanie shares the values that allow her to step into her intent and purpose on a daily basis, including integrity, authenticity and making sure her partnerships involve a mutual exchange of energy.

[15:03] Steph is working on being secure in herself, and is enjoying a new phase of feeling self-assured from a solid internal place, where she doesn’t need external validation like she once did.

[18:45] Stephanie shares her love/hate battle with social media, and how she values one-on-one in-depth conversations over surface-level connections. She opens up about how when her energy changed, she noticed that her following mirrored her evolution by becoming much more positive, too.

[20:44] She talks about the joys of positive connection via socials, plus the pressures of social media from a business perspective, including what potential partners look for and the difficulties of being assessed via the analytics of her Instagram account.

[25:30] Stephanie shares her morning rituals, including telling herself every morning, “Something amazing will happen today.”

[29:10] Stephanie opens up about being ready for a relationship and creating a family of her own, and talks about what she’s looking for in a partnership, as well as the process of surrendering her desires to the universe.

Where to find Stephanie Rice

You can also connect with Tory Archbold and her offerings, including corporate keynote speaking, business mentoring for women and her popular group mentoring experience, the Business Attraction Program, here: