Daring To Lead From Within with Kemi Nekvapil 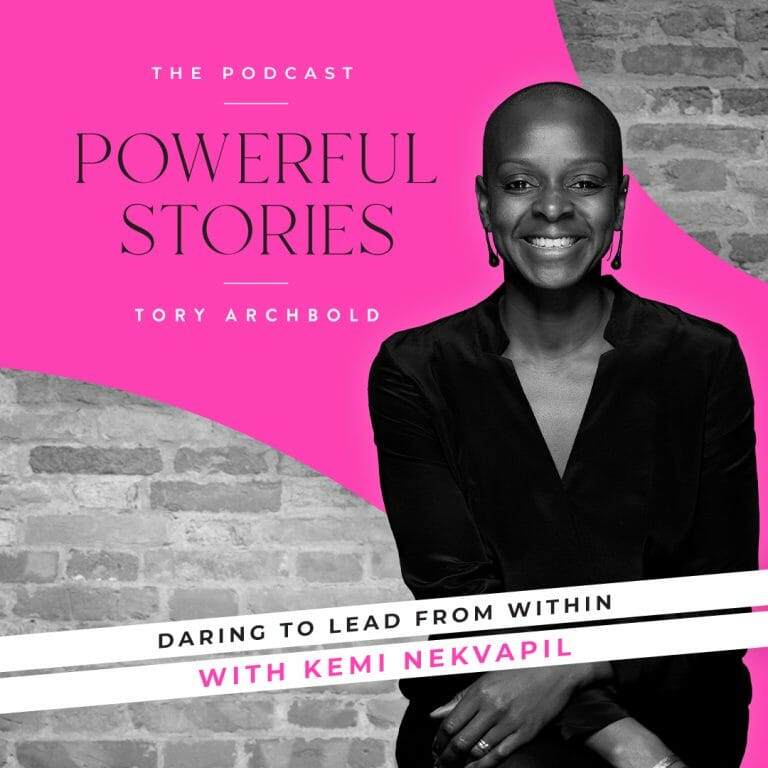 I’m so grateful to be bringing you the incredible Kemi Nekvapil. I believe she is one of the best business coaches in the world! Kemi’s career is a rich tapestry and her wealth of knowledge spans across many fields.

Have you ever felt that flutter in your gut when faced with a crossroads?

Your heart may skip a beat or butterflies erupt when soul-searching for your next powerful step.

But then your mind gets in the way.

My next guest had five primary carers from the age of 2 weeks to 13 years old living as a foster child from a Nigerian family born in Britain. Her childhood was full of instability and uncertainty, moving from home to home. She found her power when she was offered a choice at the age of 13. Her entire world stood still in this moment. She had never realised she had the right to choose.

Kemi went to a baking college and worked as a chef on and off for 17 years. At the same time, she plunged herself into drama school and worked hard to become a very successful actor. Her body of work includes a leading role in a British television series for 3 and a half years (even writing her own role for the last 6 months), working for the Royal Shakespeare Company, and performing in a film with Colin Firth in the South of France.

We talk about the crossroads Kemi felt when deciding the path her career should take after such phenomenal success in acting. She followed her instinct and listened to her ‘Divine Download’ to take the adventurous chef opportunity across the world in Thailand where she met her husband. She stresses the importance of listening to your intuition to become in tune with your gut, heart, and mind.

Kemi was chosen from thousands to be trained as a facilitator for Dr Brene Browns’ Dare to Lead curriculum in Texas. She talks about her journey connecting with Brene and finding her power to lead exactly as herself without needing to fit into the patriarchal, white, male model. In her coaching practice, Kemi works with other female leaders to overcome their challenges and succeed in their fields.

We’re all connected with nature and go through seasons and transformations. Kemi advises us, as women, to not do the disservice of ignoring the change when it’s happening. She created the ‘Delight Diaries’ to encourage her community to revel in the beauty of nature and the little moments every day that make us feel happy and alive.

I can’t wait for you to listen to Kemi Nekvapil's transformative, courageous, and powerful story. If you’d like to learn more, Kemi has written two books, ‘The Gift of Asking’ and ‘Raw Beauty’. She has a third book coming out very soon about women in power.

[1:26]: Kemi shares her incredible story growing up as a foster child in England. From 2 weeks to 13 she had 5 primary carers growing up. Her childhood felt unstable and powerless. When she was 13, her world came to a standstill when her foster mother asked her to choose between colours of clothing. She never had a choice before and has been choosing ever since.

[4:56]: Kemi went to a bakery college. She worked as a chef on and off for 17 years. She went to a Drama school and loved method acting. After leaving drama school she had 3 auditions.

[6:12]: She got the TV series job. She was on British TV for 3 and a half years in a lead role, by the end of the series she was writing her own role. She worked for the Royal Shakespeare Company. She then did a film with Colin Firth in the South of France and went on to the National Theatre.

[6:56]: She didn’t have any idea of what she was supposed to do, but she knew it wasn’t acting. She was pulled into the idea that she should be grateful for what she had accomplished and the opportunities awarded to her but she knew there was something else for her.

[7:42]: Her final acting opportunity was for ‘Four Non-Blondes’. She progressed through the audition process and in the end, would have been one of the first black actors to have a writing, directing, and performing contract.

[8:28]: She met a man through a contact who wanted a chef to work in Thailand. The role had no pay but provided accommodation. He needed someone to teach Thai chefs how to cook European food to a high standard. She decided to take this opportunity over the acting contract. She knew that was her crossroad.

[9:40]: She calls trusting in herself a ‘Divine download’. When she was 16 she was incredibly unhappy and overweight. She was in a PE class in school and felt a Divine Download that told her ‘if you compare yourself to anyone else, you’re never going to be happy’. This was one of the most powerful messages in her life.

[11:02]: She had suffered so much from comparing herself and she just let it go after this moment.

[11:23]: Kemi applied to the Dare to Lead website for a training opportunity to facilitate this work. She was selected to train in Texas. It was an incredible program with Dr Brene Brown.

[13:47]: When Kemi read the Dare to Lead book, she felt validated that the way she led was enough. Kemi can show up as who she is and not fit into the patriarchal, white male model.

[14:49]: Within the pandemic, Kemi felt incredibly low 2 and a half months ago. She went into the garden, saw the first cherry blossoms, and felt that spring is coming. She knew things are going to change. She has a deep connection with nature.

[15:39]: She started the ‘Delight Diaries’ within her community. You can have low days but remember to take a moment of delight when you see something beautiful, for eg. a butterfly, taking shoes off on the grass.

[16:09]: We are connected to nature. We go through seasons and transformations. Women do a disservice to us if we ignore them.

[16:50]: Kemi discusses how intuition has been trained out of us. She decided with her husband to not train their children in stranger danger. They didn’t buy a car so they could use public transport and talk to strangers. She encouraged her children to tap into their own intuition with people.

[18:12]: When Kemi works with people that are very mind-focused, she asks them what does your heart say? When we have a physiological sign from our gut, our head can often get in the way. Sit with that feeling for longer before your head takes over.

[19:01]: Kemi’s next steps include being very excited to launch her 3rd book about women in power. She is also thrilled to start her micro-organic flower farm in Victoria. The world can never have enough beauty.

Where to Find Kemi: