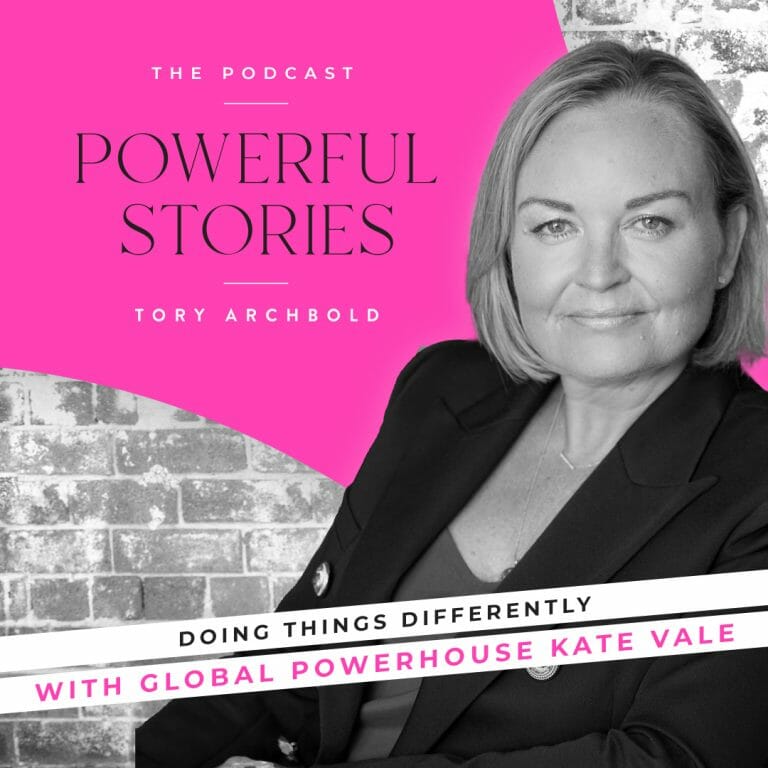 In this episode of the Powerful Stories podcast, I have an insightful conversation with the global powerhouse that is Kate Vale. Kate is General Partner at ALIAVIA Ventures, an investor, advisor, board member and a mum. I’m also lucky enough to call her a friend.

As an investor, Kate has invested in outstanding early stage companies with the current valuation exceeding $3.5 billion.

Kate Vale’s achievements include hiring several hundred employees during her tenure at Google; as well as creating the maternity leave policy at Google because it didn’t exist when she had her first baby; and playing a pivotal role in scaling the business incredibly quickly.

Fast forward to today, and Kate is the co-founder of ALIAVIA Venture, a venture capital fund that invests in females in the tech industry who are seeking to launch a global business. The fund was launched with business partner Marissa Warren after they discovered in 2019 that women were receiving less than 5% of all venture capital funding.

Kate talks about working in the male-dominated VC world and reveals some more truly staggering statistics about the gender inequity in this space, including the fact that at present there are less than a dozen female General Partners across the approximately 70 venture capital funds currently operating in Australia.

Kate is a woman who believes in ideas and is willing to back great ideas, and she also believes in people. She also eschews the fear of failure in favour of jumping off the cliff and backing herself, no matter what. This is a truly powerful entrepreneur who is using the power of experience and connection to deliver impact on a global scale, and I hope you take as many learnings away from this conversation as I did.

[1:21] Kate initially started in the human resources industry, and then pivoted into a sales-based role in the tech industry. In 2002 she moved over to Google after succeeding through a 12-hour interview process, and went on to hire several hundred employees over her time at the company.

[5:27] The second stage of Kate’s tech career saw her move across to what was at the time a small music start-up called Spotify in 2011. She grew the office to be the largest music streaming platform across Australia and New Zealand, and helped launch Spotify’s Asian division.

[7:05] Kate then gained some experience sitting on the boards of companies including Tourism Australia and Tourism Tasmania.

[7:15] Today, Kate is the co-founder of venture capital fund ALIAVIA, which invests in female tech founders. Kate discusses the biggest challenges she sees with female entrepreneurs in 2022, including balancing personal life with professional life, difficulties accessing funding, challenges in being taken seriously, owning accomplishments and the fear of failure.

[11:24] Kate believes we should reframe ‘failures’ in business as valuable lessons.

[12:23] Why female founders get such a small slice of the funding pie, and how her venture capital fund, ALIAVIA, is proving the naysayers wrong. Kate and her business partner, Marissa Warren, are both passionate about supporting female tech founders.

[16:39] We discuss the need to promote more women internally so that women pitching female-centric ideas are not blocked by men who don’t see the potential in those ideas.

[18:19] Kate shares what she’s looking for in prospective partners, (including at least one female founder who holds significant equity in the business and has a C-level role) and how to create a stand-out pitch when approaching a venture capital firm seeking funding. She reveals that the founder herself is as much a part of the VC firm’s decision as is the pitch – and says she seeks a founder who lives and breathes her business and is working tirelessly to solve a problem that matters.

[22:38] How to use technology in your business to deliver growth, including investing in R&D that delivers genuine value.

[26:07] Kate explains the type of female-led businesses she is looking to invest in; namely those in the enterprise technology and consumer tech spaces, as well as those using Saas (software as a service) revenue models.

[27:41] Doing things differently, and the meaning behind the name ALIAVIA.

[30:05] Kate’s advice on balancing family with a high-powered career

Where to find Kate Vale