From Top Model to Showstopper with Erika Heynatz 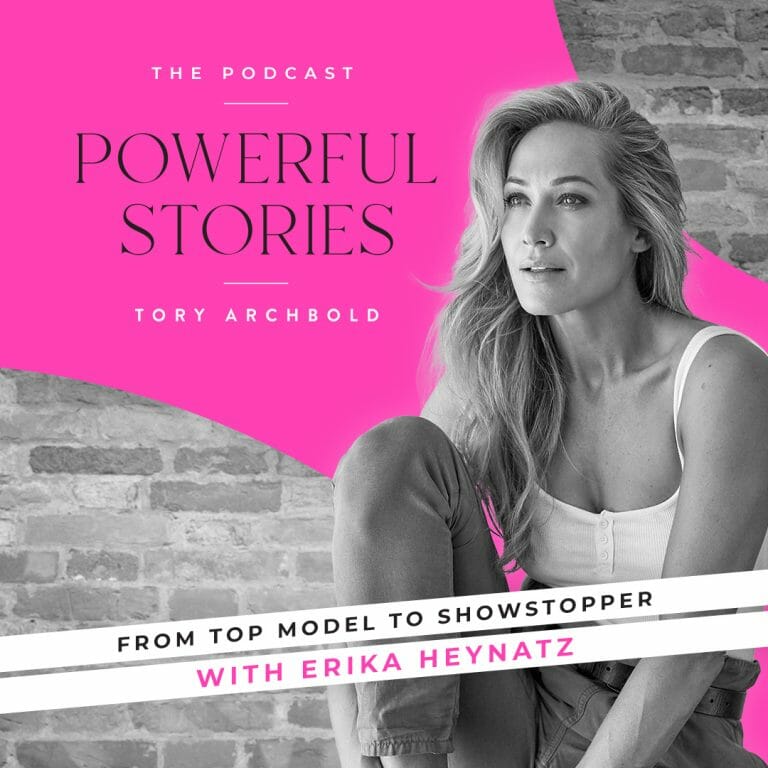 Today I am bringing you the incredibly talented Erika Heynatz, whom I have known for two decades and is one of my absolute favourite performing artists.

Courage takes many different shapes and forms for all of us. Whether you’re walking down a catwalk, standing on top of a stage, or finding yourself through challenging times, the strength and resilience it takes to keep striving and showing up for yourself everyday is inspiring and truly powerful.

Erika Heynatz studied graphic design at university before beginning in the fashion industry as a model. She built a very successful career, including walking catwalks in Europe and hosting Australia’s Top Model, before changing paths to become a performing artist.

In this episode, we discuss Erika’s early career and her bold move to become a singer and perform on stage for ‘It Takes Two’, Marie Claire, and three musicals including Legally Blonde, Singin’ in the Rain, and Rocky Horror. Her show stopping performance won her BWW’s Best Featured Actress in a Musical and a nomination for Best Supporting Actress In A Musical at the Helpmann Awards.

Erika shares her challenges, including how difficult it was to find a tribe and community when she was a model because so many people in that industry have blocked themselves off from others.

Erika warmly opens up about the nerves and fear she felt before going on stage. Through strength she changed her mindset to face her fears, find her courage and realise that it’s not about her. The incredible thing about theatre is that it’s all about the impact for the audience and purely just being in the moment that makes it a one-of-a-kind experience.

Erika talks about how she found her voice through standing up for herself and for other women. She discovered her power and strength through fear and pain. This experience has changed her as a performer and led her to build boundaries for herself and for others. She has found her passion to write her own content and plug in with amazing female creatives to tell a story of her own about perfection and disconnection.

Erika’s journey embodies bravery and courage. I know that it will resonate with many women and I’m so grateful to be bringing it to you.

[1:09]: Erika Heynatz shares how she always wanted to be an artist growing up. She then went to university and did graphic design. She started modelling to earn money while at university.

[3:11]: As a model, you were seen and not heard. Erika Heynatz had the tremendous courage to engage in the reality singing TV show ‘It Takes Two’. The experience changed her forever. The opportunity to perform on stage with Marie Claire came and despite how terrifying it was, she performed.

[5:53]: Erika Heynatz talks about when she was performing singing and skipping for Legally Blonde. It takes an enormous amount of courage and to keep pursuing it when there are ebbs and flows.

[8:21]: Erika Heynatz ensures she is very prepared before going on stage with her own ritual. She realised that it’s not about you and it’s about impacting someone else. Theatre is about being in the moment, putting the focus on the other person and think about giving the audience what they came to see.

[9:38]: Erika Heynatz believes you are allowed to be invisible for a little while. If you place your value on your visibility then it becomes slippery. Make sure that whatever content you’re making is authentic.

[12:23]: Erika Heynatz discusses how the arts industry has been in paralysis due to Covid. She shares with us how she wants to write her own content, plug in with female creatives, and tell a story of her own.

[13:26]: The story will be about the notion of perfection and disconnection. Perfection stunted her growth as a performer.

[14:21]: As a model she found it very hard to find her own tribe and community. Everybody has their guard up. When beauty fades, does that mean that a model’s value and worth fades too?

[16:32]: Erika Heynatz talks about standing with other like-minded women. Recognising that she has a voice that she’s been given and she can stand up for herself and for other women. That power doesn’t come without pain and fear, but it has defined how she has progressed as a performer and it defined her boundaries.

[18:12]: It’s so amazing to be able to bring you Erika Heynatz’s powerful story. I know it will resonate with many women and provide hope and inspiration.

Where to Find Erika: