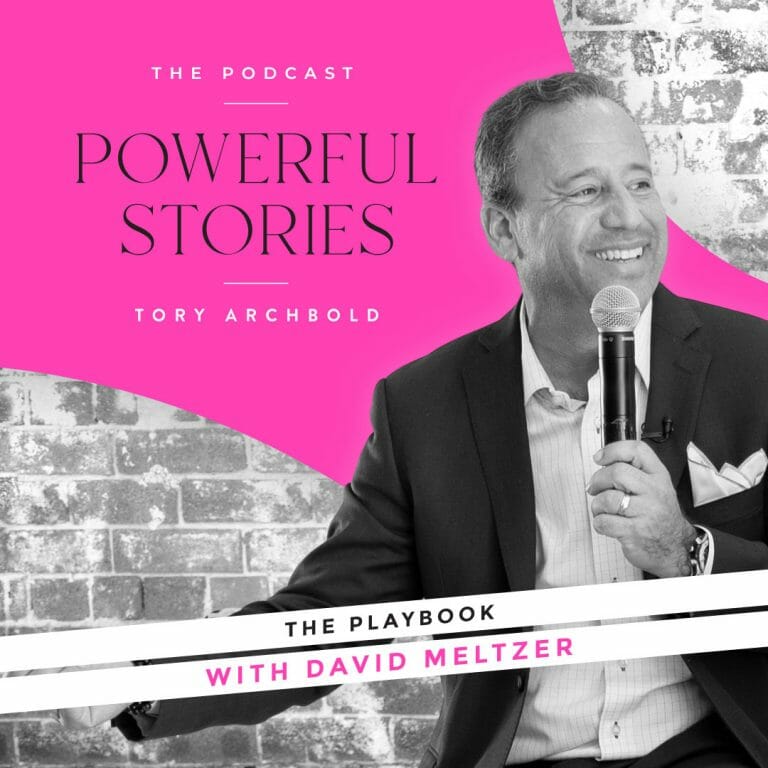 David Meltzer is a Legendary Sports Executive, Entrepreneur, and Investor who Co-Founded Sports 1 Marketing and formerly served as CEO of the renowned Leigh (“Lee”) Steinberg Sports & Entertainment agency, which was the inspiration for the movie Jerry Maguire. David has been recognized by Variety Magazine as their Sports Humanitarian of the Year and awarded the Ellis Island Medal of Honor. He is also the Executive Producer of the Apple TV series 2 Minute Drill and Office Hours which Tory will be interviewed on in series 3.

In this Powerful Stories podcast chat David shares how he hit rock bottom and knew life as he was living it had to change. By investing the time to understand and find his true self he found his life purpose and is on a global mission to empower OVER 1 BILLION people to be happy by sharing the tool kit of his life journey.  This simple yet powerful mission has led him on an incredible journey to provide one thing…VALUE.

I have to confess, this is one of my all-time favourite podcast episodes.  David has great energy, great insights and a willingness to share his key learnings to inspire others to seek change and find their happy heart.

You will want to hit REPLAY more than a few times...

David Meltzer speaks about faith and understanding. “I thought I was really geared to be more happy, healthy, wealthy, and worthy. But what I started to find out was I was already happy, healthy, worthy, and worthy, and I had to figure out what I was doing to interfere with it. And I think that paradigm shift gave me the power to have faith. And my simple faith is that there’s something bigger than me that loves me more than my mom.”

David Meltzer credits his wife for his success. “I have to give credit to my wife because I was on a journey as a multi-millionaire and I was writing the most notable sports agency in the world, which gave me access to things that even billionaires couldn’t do or afford. And so I’d been lying to myself for many years, surrounding myself with the wrong people, the wrong ideas. And all of a sudden my wife, as I came home one morning at five 30 after lying to her partying, told me she wasn’t happy, told me she was leaving me, told me to take stock in who I was and most importantly, what I wanted to become. And that moment to me changed my life because I had no idea. Because nobody was telling me no. I always say, be careful of all the people that say yes to you and surround yourself by the people that actually give you the radical humility to know that you don’t know what you don’t know. And so, although I was upset with my wife when she told me at first that she was leaving by the next day, I realized she was right.”

David Meltzer does not believe in limiting himself and discusses why his values give him purpose. “My values started with gratitude. When I realized that gratitude would give me perspective, it allowed me to to find the light, the love, and the lessons in everything that I did.”

David Meltzer talks about life lessons and becoming accountable to source.  “When we take accountability, we now have control by surrendering. How am I utilizing fear to either get me up, get me started, get me back started? Or how am I using fear to get outta my own way?

Tory Archbold asks David Meltzer how he learnt the art of forgiveness. “So the way that I mastered that was starting to read about forgiveness and the best text that I could find about forgiveness was a Course in Miracles with Marianne Williamson which showed him the art of forgiveness within the context of his own values. “It also talks about forgiveness in the realm of time. Alot of people don’t understand that time is so important. If you look at the greatest leaders in all industries, that they all have studied and mastered time for different reasons. One, some people have mastered time in the past to understand how not to limit themselves with the meaning that they give inflection points or defined moments according to the quantitative measure of time. Obviously today, in the present, multiple famous and productive people have mastered time for today. But even more importantly, in the future. And believe it or not, forgiveness is one of the key skill sets to maximizing the quantifiable value of time.”

David Meltzer talks about switching his mindset, and making others accountable. “When I was 13 years old, I was completely broke. Poor six kids, single mom, my mom worked two jobs, packed my dinner in paper bag, traveled around after teaching second grade raising five boys and one girl and then filling up turn styles at convenience stores with greeting cards just so we had enough money sometimes for food stamps so we could eat. But when I was 13, I got a real watch, a great gift, I got a watch and it was my prize possession. You could imagine a poor kid getting a really fancy real watch. So the very first day I could, I wore it to school and the exact opposite of what I thought was going to happen happened. I thought people were going to look on me is if I was one of the rich kids or, but no, it was one of the most discouraging things people made fun of me. They said that fake watch, you know, you’re such a loser.”

“I came home crying and I put the watch in my drawer and my mom noticed I wasn’t wearing the watch anymore. And she asked me why. And I said, Well, because everyone’s making fun of me. They said, I can’t afford a watch. Did I steal it? Is it fake? And I said, Mom, I’m never gonna wear that watch. And she said, Oh, she said, That’s okay. She said, Someday you’re, I get choked up thinking about it. She said, Someday you’re gonna be so rich that you could wear fake watches and everyone will think they’re real. In fact, they won’t believe you when you tell them that they’re fake. And that’s exactly what I did and it’s exactly what happened. And so to this day, I wear fake watches, the nicest looking, nicest brands of watches and I give them away and I tell people that they’re fake.”

What is David Meltzer’s life mission?  “Building and creating happiness is to create a community of sponsors and power sponsors, people with open minds, open hearts and open hands that are willing to either help others or find someone to help others and vice versa. And so through that ego scarce industry of sports and entertainment, I found my heart, I found humility and I found the ability to lead as an intelligent follower, not as a manipulator, a liar, cheater, an oversell, a backend seller, a denier, but instead a supplier, a supplier, an supplier of inspiration. And I apply my why, I’m not in search of it anymore.”

David Meltzer talks about what is takes to be real. “ I get all this extra credit for perspiring which is so funny. And I want more men to feel comfortable perspiring. And I want women to also equally feel comfortable having an emotional perspiration called emotional crying. The more true you are to yourself in the pursuit of your own happiness and the pursuit of your own potential, you too will achieve that passion that you share with me, that purpose that you share. And even profitability.”

Tory Archbold asks David Meltzer how important is a team that surrounds you? “Well, I built a team around me by being aware of who feeds me. 80% of my time was spent on people, ideas, circumstances, and events that bleed me. And what I found was if I was more discriminative about those people that feed me, that I would feed those that feed me so they could feed me and others even more. And this spectrum of quantified values that I put into my teammates are the most essential. When I say teammates, I mean the people, the collective consciousness around me, whether it be professional or personal. My biggest downgrade wasn’t professional bleeding, it was personal. I had surround myself with all the wrong people and all the wrong ideas. They were bleeding me. And I was spending 80% of my time on people that believed me on circumstances, events, and situations that were bleeding me. And when I went ahead and said to myself, I am gonna allow people to fall away from me that are bleeding me or even fire them from my life, that I was gonna create a collective consciousness of sponsors and power sponsors that give and receive through three steps.

Where to find David Meltzer